A roundup of things our editors — and a few contributors — are excited about in a given week. A Glimpse Into the World of Mike Kelley

Hauser & Wirth has spent the last few years breaking down the complex career of Mike Kelley, the Detroit-born, Los Angeles-based artist who died by suicide in 2012. If there is a steady theme throughout Kelley’s diverse work, it is his chameleonic ability to leap between genres and methods. He used video, drawing, installation, sculpture and found objects — sometimes all in the course of a single piece — to examine the darkest corners of his own subconscious and memory, often hinting at a mysterious, unspoken trauma that is revisited again and again but never quite defined. Kelley was a conceptual trickster so subtle and clever that in the gallery’s latest view of him, an exhibition called “Timeless Painting,” curated by Jenelle Porter, the word painting itself is delivered with a knowing wink.

The show’s centerpiece is a remarkable and little-seen installation from 2006 called “Profondeurs Vertes,” which includes slow, panning videos, each projected on its own large screen, of various American paintings from the collection of the Detroit Institute of Arts, the museum Kelley visited as a boy. The paintings Kelley focuses on include Thomas Wilmer Dewing’s “The Recitation” and John Singleton Copley’s more famous “Watson and the Shark.” As a statement on the artist’s formative years, “Profondeurs Vertes” is oddly moving. The videos feel like a physical approximation of Kelley’s eyes as a child; as the camera scans the works, we are seeing them, like Kelley himself, as if for the first time. And yet he tempers this nostalgic, almost sentimental view of his childhood by including alongside the videos jokey drawings and paintings that examine various points of perspective in his source material: One of them is a close-up, painted in Kelley’s own hand, of what could only be described as the least important figure in “Watson and the Shark”: a boatman from that work’s background, who is seen only through the legs of a more prominent figure in the painting. This elevation of the loser is a typical gesture for Kelley, whose work so often returned to his roots in the seemingly unremarkable rust belt. But it also illustrates — somewhat literally — his fondness for one-line gags, which is something (as someone who also grew up in a sad Detroit suburb) I’ve always considered to be very Midwestern: best get everyone laughing before anything gets too serious.

For admirers of Kelley, “Profondeurs Vertes” alone makes the show worth seeing, but it is full of treasures that demonstrate the depth of the artist’s self-exploration. One work is a detailed painting of a wood-paneled wall — the kind one might find in any suburban home anywhere — onto which is affixed a pink flier for “An Effigy Hanging Contest.” This was an actual contest that Kelley entered in college at the University of Michigan. Naturally, he won. “Mike Kelley: Timeless Painting,” is on view now through Jan. 25, 2020, at Hauser & Wirth, 548 West 22nd Street, New York, hauserwirth.com. — M.H. MILLER

Since opening the fashion and homegoods shop Tiina the Store in Amagansett, N.Y., in 2012, Tiina Laakkonen has filled it with refined women’s wear from the Japanese brand Arts & Science, sculptural furniture and tabletop pieces by the British artist Faye Toogood, and loose-fitting shirt-dresses from the French line Casey Casey. But over the years, Laakkonen, who had previously worked as a stylist, noticed that it was increasingly difficult to find quality, soft cashmere pieces that would last and not immediately pill. So she decided to design her own small collection of cashmere sweaters — her first foray into making clothes — evocative of old Jil Sander styles that she and her friends would buy at the Burlington Arcade in London in the mid-1990s. “I realize that kind of sweater didn’t really exist anymore,” she says, referencing the cozy and timeless garments that she would hold on to for years. “It’s about a return to something classic that has been somewhat lost.” Her new four-piece collection, which includes a men’s wear-inspired cardigan and an oversized turtleneck, is available online and in her store now; the pieces are made entirely out of Scottish cashmere and are available in a range of traditional Scottish colors, like sand, navy and a deep red (aptly named “merlot”). Christy Turlington appears in the accompanying Kurt Markus-shot campaign — and a portion of the sweaters’ sales will go to Turlington’s maternal health nonprofit, Every Mother Counts. $750-$1,250, tiinathestore.com. — ISABEL WILKINSON 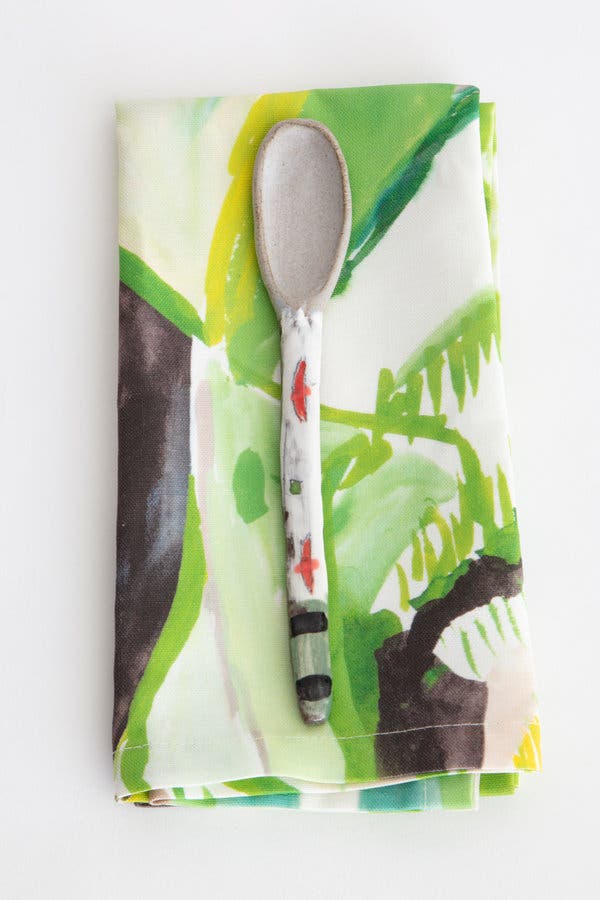 As Nana Spears, a co-founder of the New York design studio Fort Makers, was thinking about what the collective’s second show at its new concept shop on Orchard Street might look like, it occurred to her that her preferred way of making work — with an eye toward collaboration and play — was in some ways analogous to the custom of having friends over to share a meal. “The Dinner Guests,” which opened Thursday night, centers on a Noah James Spencer-designed walnut table whose legs — straight on one side and curvy on the other — are among the subtler clues that the stage is set not for an ordinary gathering, but for one that celebrates the askew and nods to the eccentric parties thrown by Salvador Dalí.

Everything on view was designed by a Fort Makers founder or member: “They’re like surrealist sunsets,” Jason Bauer said of his and Romina Gonzales’s ombré drinking glasses, each with a colored glass ball pressed into its side. The pair also produced a series of footed glass punch bowls that, to Bauer, look as though they might walk off the table, while Shino Takeda made the ceramic plates decorated with faces constructed from Miró-style shapes. Behind the table are six neon-colored resin and papier-mâché masks by Naomi S. Clark that, for now, are the kooky guests of the show’s title, though Spears is considering throwing an actual dinner to activate the space. “It’s hard to sell things once they’ve been used, but I’ll probably do it anyway,” she said. Surveying the room, one does get the sense that the painted canvas-covered chairs are calling to be sat in (“It’s as though you’re in a painting,” says Spears) and the masks to be worn, though diners would need to remove them to eat. Not that that would detract from the experience. Included in Dalí’s 1974 cookbook, “Les Dîners de Gala,” a copy of which is propped up near the entrance to the show, is the artist’s proclamation that “the Jaw is our best tool to grasp philosophical knowledge.” “The Dinner Guests” is on view now through December 31 at Fort Makers, 38 Orchard Street, New York, fortmakers.com. — KATE GUADAGNINO

A Collection of Subtle After-Dark Accessories

Each fashion season offers up a spectrum of colorful new accessories, but it’s often those made in black leather that stand the test of time, serious and soigné in equal measures. Prada’s latest collection of bags and travel pouches takes this idea to the furthest possible extreme: The leather, metal hardware and silk lining of each style are pitch black. The name of the collection, appropriately, is Lights Out, and the pieces build on an earlier capsule of monochromatic styles that the brand released last year, following Miuccia Prada’s fall 2018 show. That season, the set evoked a dark dystopian cityscape, and a year later, the idea of dark times calling for even darker fashions endures.

But in the absence of color, texture prevails. The collection’s tone-on-tone versions of familiar Prada handbags — the ladylike two-handled Galleria, the Panier tote and the half-moon-shaped Odette shoulder bag, for example — are crafted in glossy crocodile, textured Saffiano leather and smooth calfskin. The branding is kept to a minimum (this was, of course, the house that introduced simple nylon bags in 1984 as a riposte to more showy arm candy), and even the label’s own instantly recognizable triangular logo tab is subdued into near obscurity by darkness. In a nod to modern needs, the offering also goes beyond handbags to include less traditional accessories, such as a crocodile lipstick case with a gunmetal chain strap and a miniature cross-body bag sized to accommodate only a cellphone. After all, sometimes the greatest thrill is carrying barely anything at all. Especially after dark. prada.com — OSMAN AHMED

Opening next week at UTA Artist Space in Los Angeles, “Disembodiment” is a group exhibition curated by the Chicago-based gallerist Mariane Ibrahim featuring figurative works by six 20-something-year-old black male American artists: Jarvis Boyland, Jonathan Lyndon Chase, Jerrell Gibbs, Marcus Jahmal, Clotilde Jiménez and Vaughn Spann. Ibrahim’s lineup reflects an emerging generation of artists’ images of the self, centered not on race but personal experience: “I was really into the idea of blackness becoming invisible,” she says, “of looking only at the emotions and movement of the body.”

The artists take distinct approaches to figuration, making use of different materials and distorting the body to varying degrees of abstraction. They recontextualize its features according to a range of overlapping themes. The Mexico City-based Jiménez, 29, re-evaluates masculinity in his mixed-media collages, isolating bodybuilders’ muscles into discrete, exaggerated parts. Elsewhere, the Chicago-based Boyland, 24, explores themes of queerness while focusing on the finer nuances of color and texture: the reflective surfaces of certain fabrics as they fold and drape across the body, or the way that skin can refract light into various tones, producing more colors than initially meet the eye. “Disembodiment” is on view from Nov. 22, 2019, to Jan. 25, 2020, at UTA Artist Space, 403 Foothill Road, Los Angeles, utaartistspace.com. — JANELLE ZARA